Tita Can Coach the Canucks to a Cup! | Erickson Coaching International

Tita Can Coach the Canucks to a Cup!

So what's next for an HR and executive performance consultant sought after worldwide?
Luz del Carmen Odiardi, Ph.D.,affectionately known as “Tita”, has a dream…

A CRAZY dream…She wants to help the Canucks win a Stanley Cup! Now this may be a bit of a sore spot after last season’s depressing ending but I believe she can do it…

Assess Systems is big; it’s available in 42 countries, in 16 languages and it allows Tita, based in Cuernavaca, México, to accurately advise companies who their star players are, who needs more invested in professional development, and who is never going to be an asset. Being able to assess 32 personality features to evaluate intellectual abilities and other factors influencing job-specific competencies allows the companies she works with to identify skill gaps, performance levels, development progress, and succession needs, thereby, ensuring not only the company but their executives each achieve their full potential. Tita has been using this invaluable tool for the last eight years. This year she decided to use Erickson Coaching International to enhance it even further.

Although she’s been practicing as a certified coach in México for the last 10 years, Tita felt limited by the program she had taken. “It was all just theory! With Erickson, I received theory and practice in perfect balance and it made me feel comfortable enough to apply the techniques immediately.” She completed Erickson’s Summer Intensive this past July and is enrolled for Module V starting October of 2011. It was Erickson’s ICF approval and their great reputation that won her over, what she didn’t expect was the huge community of coaches from all over the world. “I felt very challenged but also excited by that. There were people working in so many varied areas; I found it to have a great synergy.”

Because of the confidence she gained at the Erickson’s Summer Intensive Coaching Training, Tita is now seeing a lasting change in herself and her business; she is coaching a client in India and will soon be embarking on a new venture with Salesforce.com in México. Combining services with them and targeting companies in financial crisis will allow her to use the skills Erickson presented her with to encourage employees to maximize their potential while still allowing companies to focus on their business objectives.

“Companies in crisis are only interested in sales but here is an opportunity in the marketplace that we can capitalize on. We can ensure both sales targets and employee needs are being met.”

Tita Knows Business is Business; Whether it’s the Corporate World or the World of Hockey. 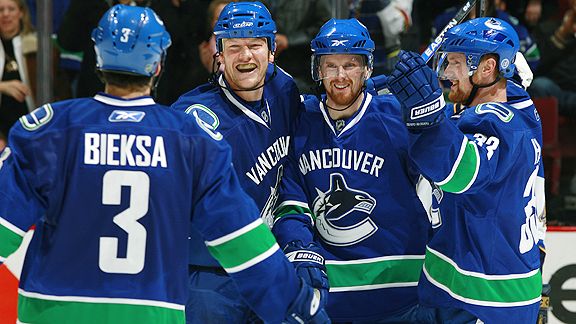 based in México but Tita works with clients from all over the world: Brazil, Englan, and the U.S. included. Canada is now on her list. Through her marriage to her late husband who was from Canada, Tita received her permanent Canadian residency last week which means she’ll have to live in Canada for five months out of the year. She already has an apartment in Vancouver so all she has to do now is decide in which niche to market herself. “Well…now that I am looking for a job in Canada, I have two potential job options. I had an interview with Assess Systems in Toronto and I would like to continue my work with them but my CRAZY DREAM job would be as a sports psychologist and coach for hockey players!”

When I ask her which team she would like to coach there is no hesitation. “The Canucks! I was so disappointed this spring but I know it’s all in their heads. You can see it in Luongo’s eyes, they win almost all their home games because they believe they will; it’s their thinking that they need to work on!”

So her next focus will be team coaching through Erickson. “I am an instrument, a facilitator for aligning vision and practice. I help people create positive change in their lives and allow them to convince themselves they can create any future they want. They become confident that they will make the best choices.”

I think that sounds like just the kind of thing the Canucks could use.

Our Mission is To Inspire Personal Growth and Human Development Globally Through Solution-Focused Coach Training. Join our community of over 45,000 Life Coaches and Business Leaders to Change the World One Conversation at a Time.